The L-Club hotel at Hluboka was quite a find, thanks to Trip Adviser. A ground floor bar/hotel with rooms on the first floor! The ambience was distinctly 1968 – if I described lots of dark varnished wood, amber coloured beveled glass window treatments and vases of plastic coloured floral arrangements, you would get the picture?

But the rooms were as I have come to expect, clean, airy with fresh linen and hot shower. But there were nice touches by the attentive Madame de hotel! She had class and was genuinely caring. Breakfast was above average.

Did she have “Wi-Fi” I asked? Of course was the reply but the “signal may be a little weak in the rooms.” In reality it did not connect at all and one had to venture down stairs to sit within 2m of the modem to connect!

The next morning as she puffed on a fag at about 8am, (it was not her first for the day) she chatted on and eventually bemoaned the fact that working 7 days a week from 7 am till 11 pm, she had only last year had her first holiday in 12 years! I commiserated and said that in Australia, I had colleagues who had a holiday every 12 weeks. This only aggravated the situation, she puffed vigorously on her cigarette, exhaling in my general direction so I modestly explained that I sat somewhere between 12 years and 12 weeks in terms of the holiday time line.

It has dawned on me that Japanese tourists can now be readily identified by the camera they tout. They are the world experts of miniaturization, they are addicted to their iPhones, yet they eschew Apple or “small” when it comes to taking pictures. Invariably they snap anything and everything with the latest Nikon or Canon SLR! This of course only applies to Japanese younger than 28. The rest have an iPad which I have described in a previous blog.

Some pictures of the cycle day from Hluboka to Cesky Krumlov. Today I did not get lost except mildy so in a large town on the way! It was route 12 all the time and other than about 3 km on a main road, the rest of the 45km was on quiet country lanes or dedicated cycle ways.

However the universal “no cars or motor bikes” sign – stylized car and bike on a blue background with red circumference and bold red line through the centre, occasionally is ignored! This leads to the sudden and totally unexpected appearance of a small, clunky car careering around a bend, startling the cyclist and driven by an equally startled elderly woman who gives the definite appearance of not exactly knowing how she actually ended up on this narrow lane anyway! 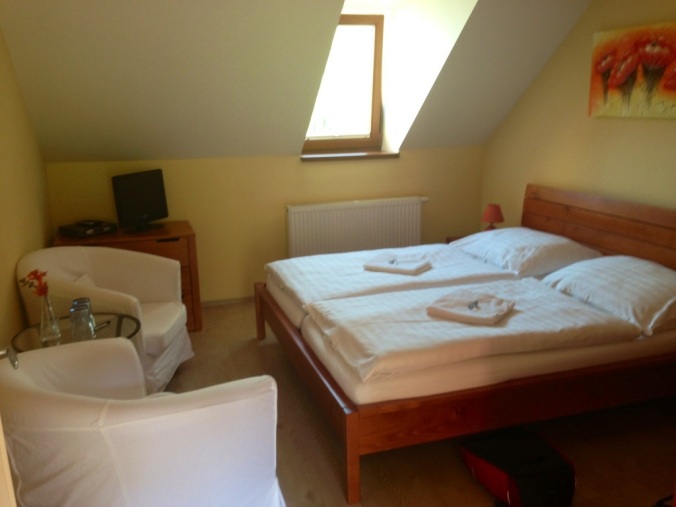 My room in the Penzion Delanta Cesky Krumlov