The last day of a great 8 days of cycling with sublime weather and routes.

This final day was the longest following the valley with a few gentle climbs despite the fearsome elevation graph above. The maximum gain was only 150m.

A deserted chapel on the road to Daglan

but wait, there’s more, or as they say at an Apple event… “one more thing….”

Climbing (not riding but walking )

I think I need a beer

The route was to La Roque St Christopher thence St Leon sur Vezere. Again a relatively early start with a brisk climb at the beginning, which of course meant a great descent on the return.

The route for the day

On the road to La Roque St Christopher

A fascinating education on cave dwelling in which for more than 20000 years humans and their ancestors carved villages out of the cliff face using the natural caves with modifications. It was primarily for security rather than to market penthouse dwellings!

One of the more fascinating pieces of history which caught my eye was the reign of Charles 111, King of West Francia from 879 to 929. He managed to father 6 daughters by his first marriage, a son by his second marriage and several “bastards” . He was affectionately called Charles the Simple, although obviously able to do more than simple arithmetic! Actually the French word was more literally translated as “straightforward”.

Britain will, in the near future, have its very own Charles the Simple. 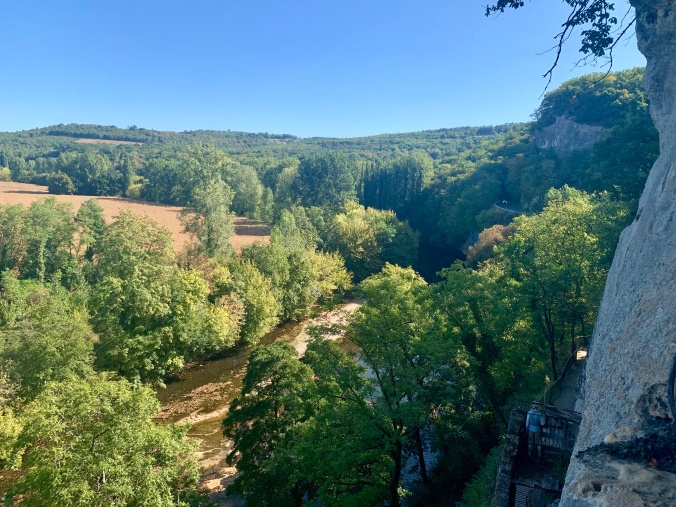 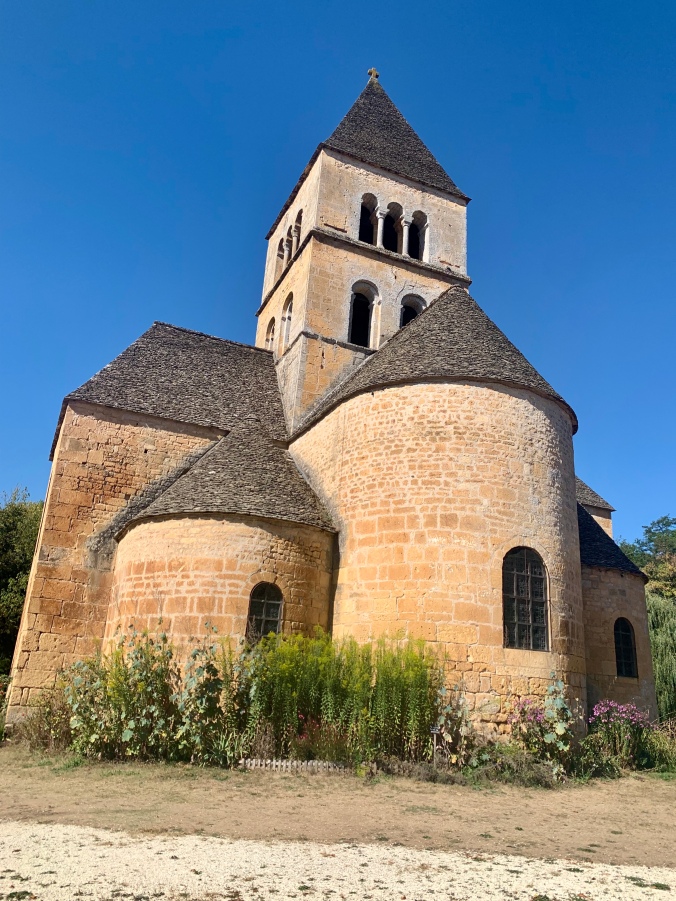 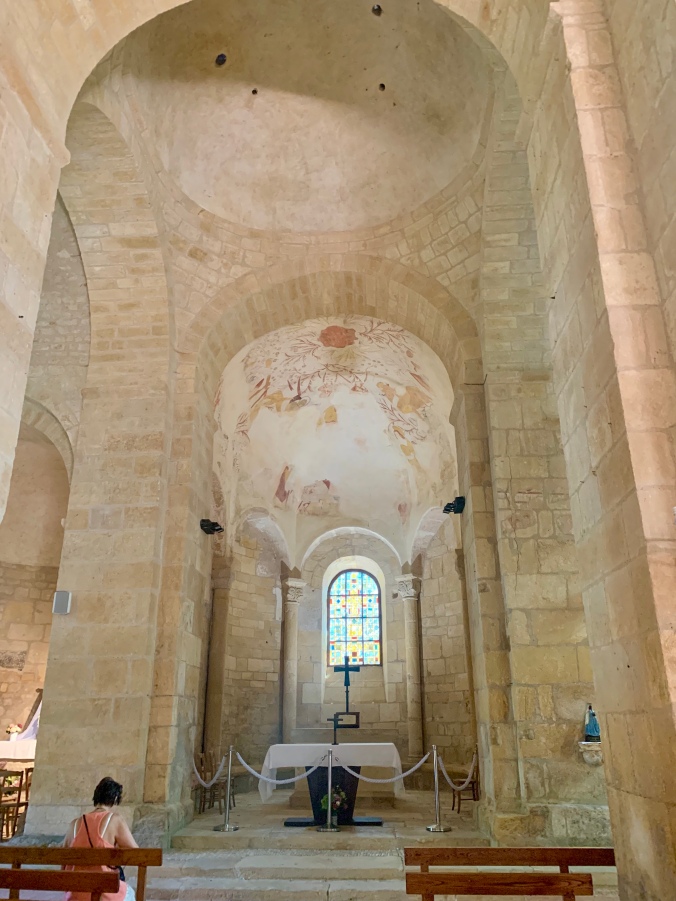 Yet another small street this one in St Leon

Another beautiful day of “doable” cycling setting out a little before 9am with crisp, cool windless weather. Here is the route map: 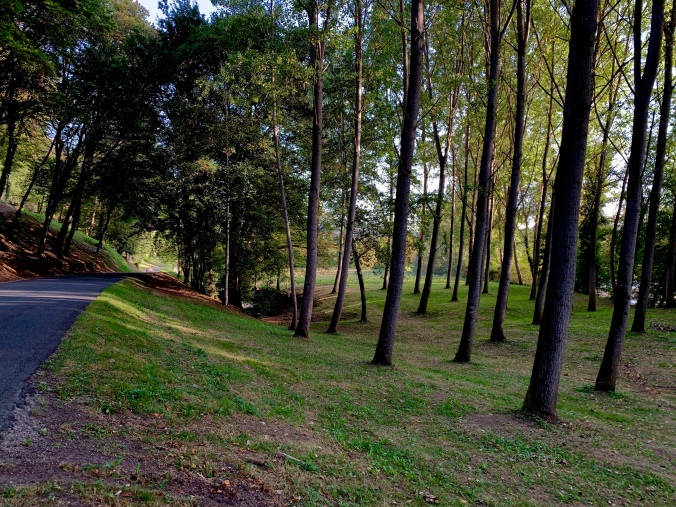 Another bloody Chateaux on the road to Milandes.

I have a sense that almost all of these fairytale chateaus are privately owned and at least one of which I rode past, by a middle Eastern oil sheik. I don’t for one moment assume that it’s the only such one.

Josephine Baker was an Afro American singer and dancer who rose from poverty to become one of the most famous stars in the Paris music and vaudeville shows of the 30s and 40s. Equally famous for serving in the French resistance, sheltering people wanted by the Nazi and also after the war adopting 11 orphans from all parts of the world and espoused that great truism “all men are created equals” well before her time. She died penniless, so generous was she with her philanthropy that was forced to sell the chateau. Look her up on Google 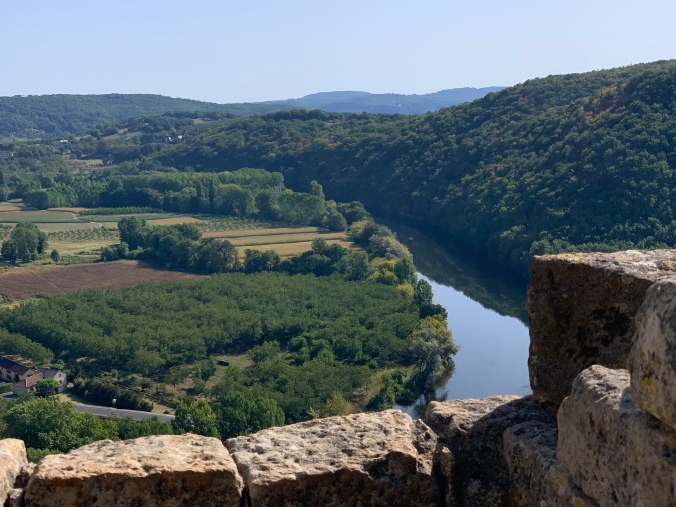 The view from yet another chateau- the Castelnaud Castle

The church at St Cyprien

Thus Romanesque church in St Cyprien once belonged to an Augustinian Abbey. Of course like all Roman Catholic Churches it had to have a “relic” and as Jesus’ foreskin had already been claimed, the Augustinian monks were quite circumspect about the dilemma and bid for a thorn from the crown. Being a frugal Order they were more than content with just one thorn. It was called the “Sainte Epine” or holy thorn! But there is more to this delicious story as it ( the thorn) had naturally miraculous powers and so sick pilgrims would flock to the church so that the Abbey would rub his thorn against the body of the sick!

The practice of rubbing a little prick against a parishioner’s body is still carried on to this day in some monasteries. 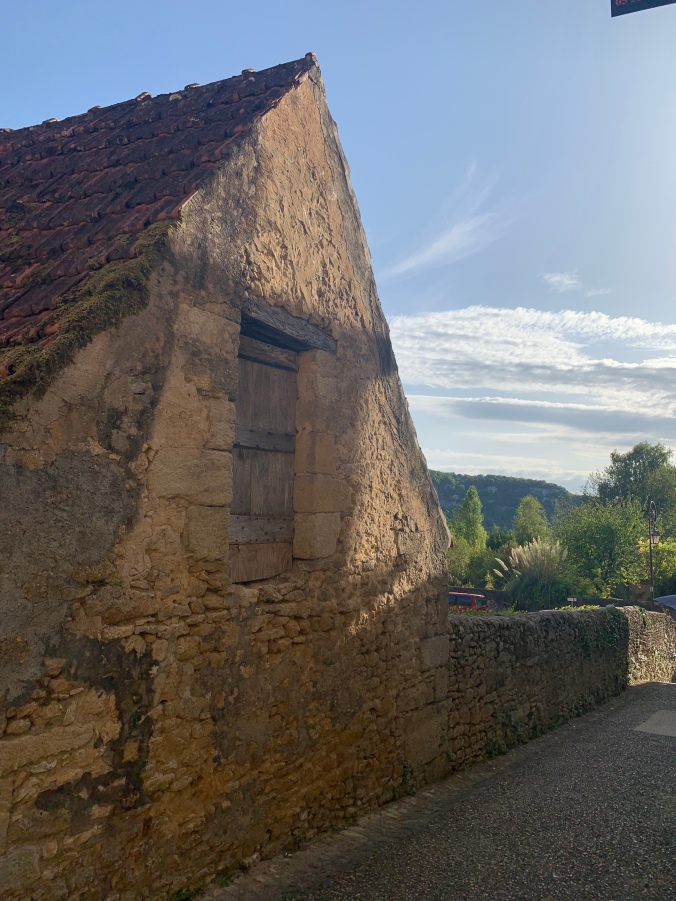 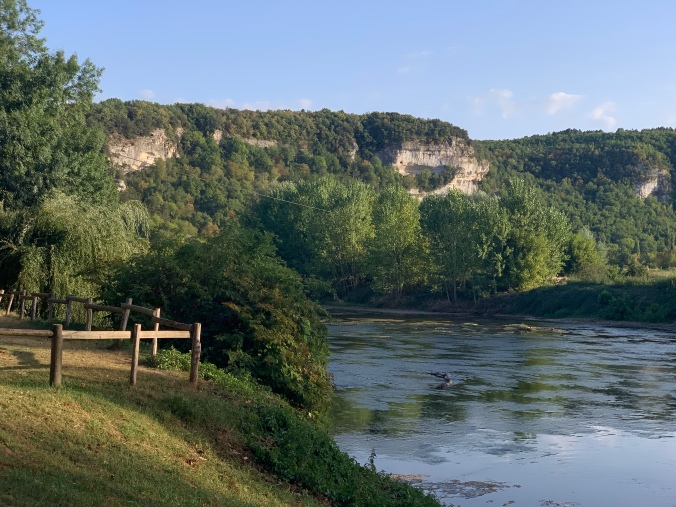 The Dordogne in Les Eyzies

A delightful meal inclusive of the tour price! Eating at arguably the best restaurant in the Dordogne. The reviews in Trip Advisor certainly agreed.

I dined with the 3 Canadian women who are with same cycle company and whom I met at the outset but not quite the same itinerary. Good fortune had us arriving at La Roque-Gageac on the same day. It is the custom of these 3 travel companions to share a bottle of champagne at some stage and tonight I was part of the group so a bottle of the best quality Champagne was duly ordered and consumed.

Here is the menu of the chef for the season / which I chose although there was an a la carte option. 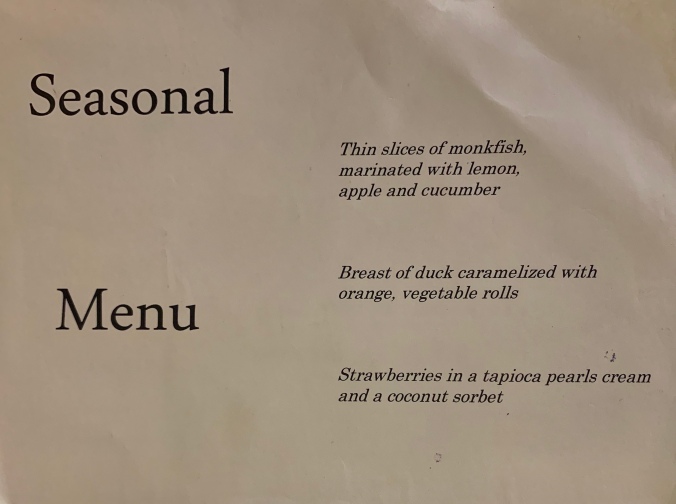 So the best for last.. 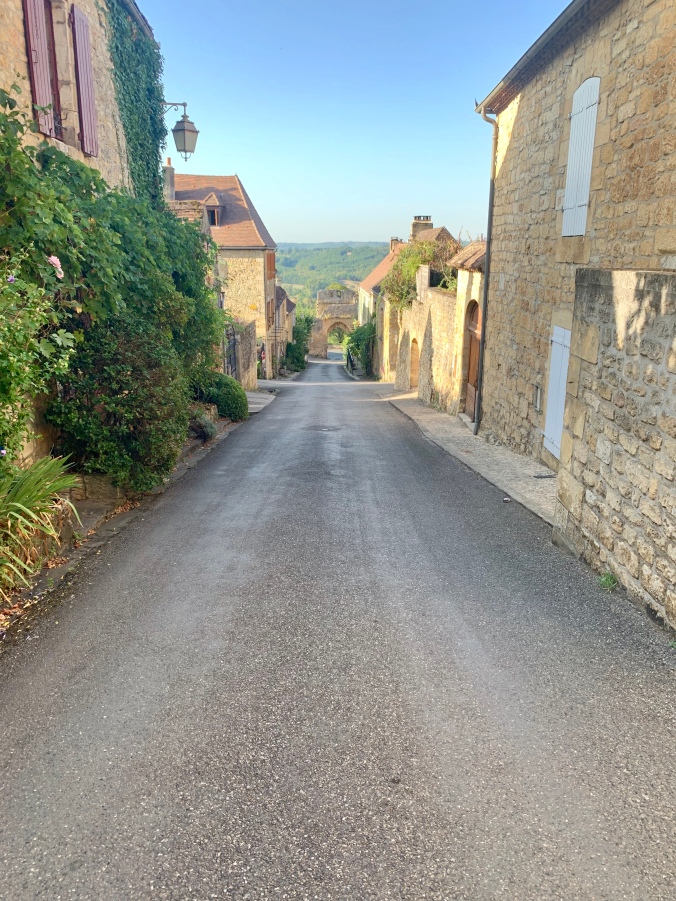 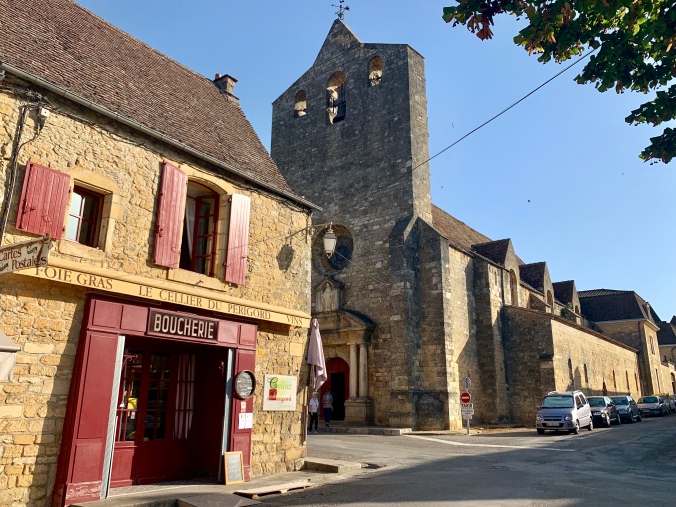 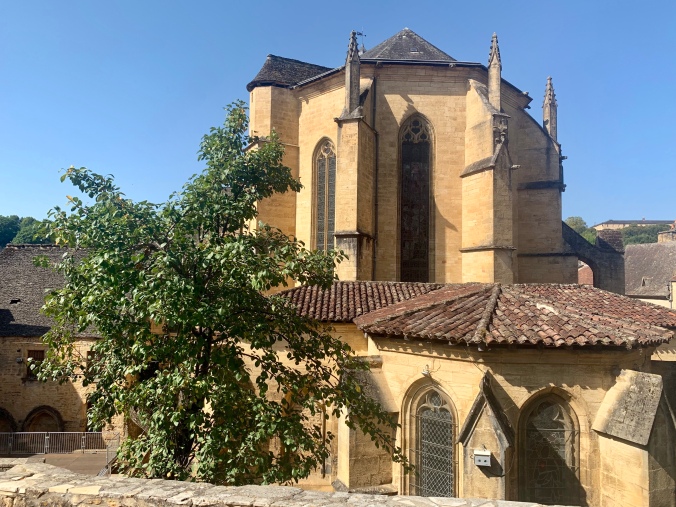 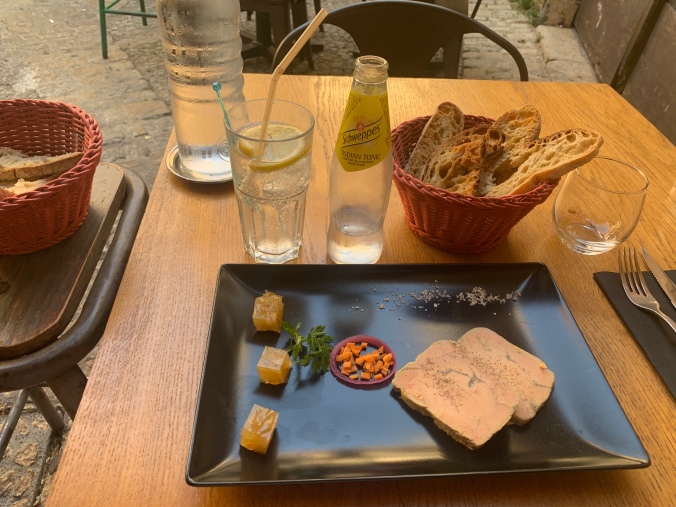 As is my custom, early to bed and early to rise…. absolutely necessary as the midday sun all this week will drive the temperature into the low 30s. Riding leisurely through cool hills and walnut plantations.

Adelaide has “The Reisling Trail”, the Dordogne has the “Nut Route”

The countryside in France has a unique bouquet of sweetish new mown grass with an occasional tinge of manure finishing on the nose.

Today was not without incident as I broke the shaft of the rear derailleur, no mean feat in a brand new bike.

For the unitiated, the black dangling thing should be attached to the rear axle

The gardens of the Castle la Treyne – now a hotel 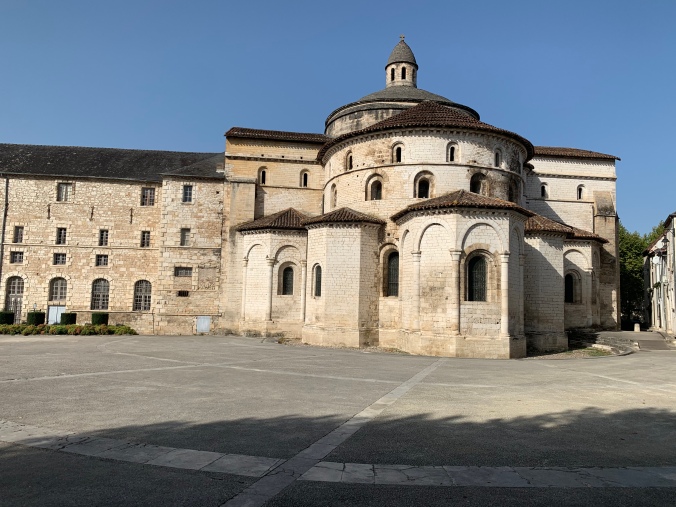 The monastery of the town of Souillac

now follows a few pictures of La Roque-Gageac arguably “the prettiest village in France” nestled between the Dordogne river and the cliffs , indeed with houses built into them. 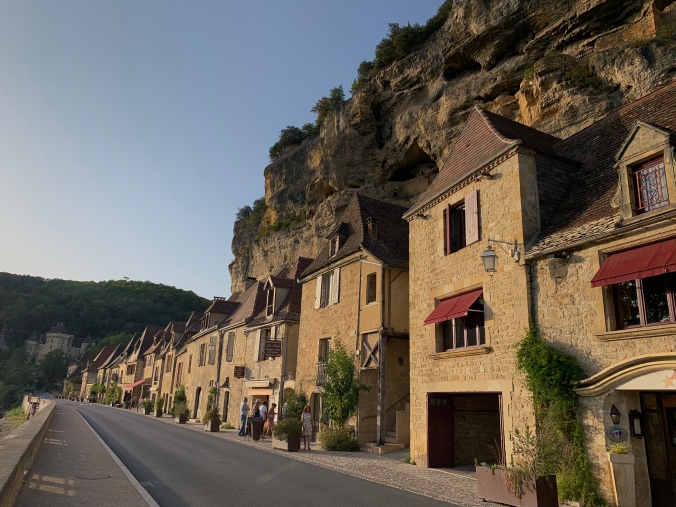 The small blip in the sky is a hot air balloon

Fried Pate de Fois and mushrooms , swimming to the point of drowning

This is the route and elevation screen grab:

(Incidentally the small red dog leg was NOT as you all assume, on past performances, a lost, vaguely disoriented monument , but a genuine diversion to the Gouffre de Padirac) 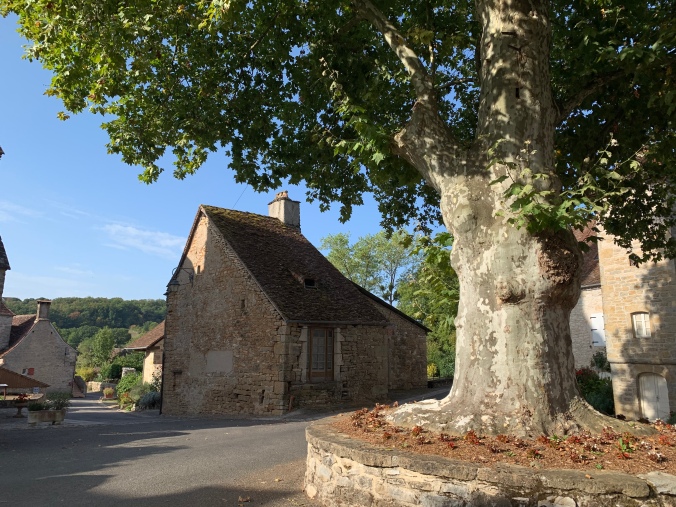 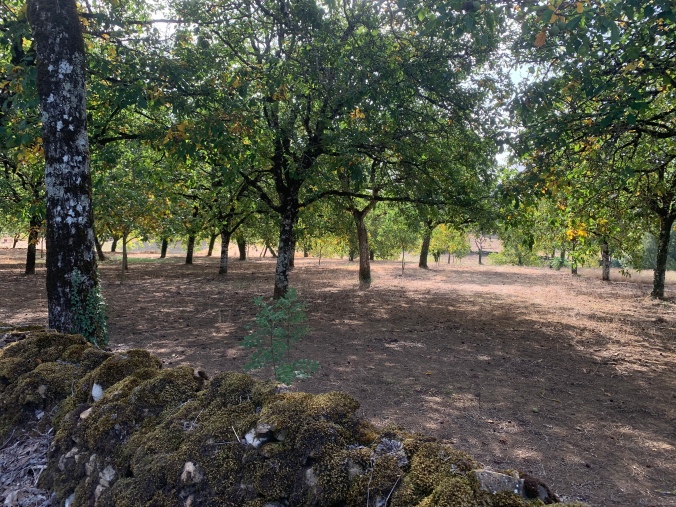 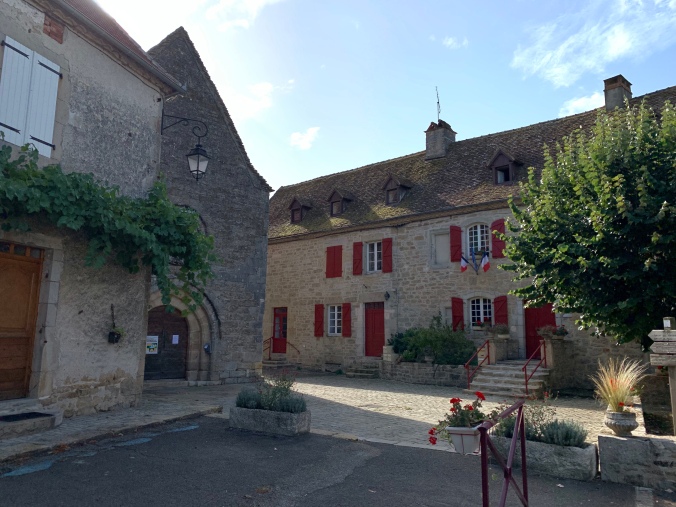 The name Rocamadour derives from the local dialect which refers to a hermit who lived in a cave on the awesome limestone walls – ” roc amator” – he who loves rocks. Each to his own, I say.

And another thing, lest you think that the Roman Catholic Church has suddenly become inclusive and celebrating diversity, sadly it is not the case. The black Madonna was a not quite pure white statue carved from walnut wood which over the millennia, has been blackened by the soot and smoke of burning candles!

During July and August upwards of a million tourists visit Rocamadour each month! Thankfully I arrived early September when the numbers drop dramatically: 999,999. Seriously the town was decidedly peaceful.

The other quaint custom is that pilgrims even today are required to climb the 223 steps of the Great Stairway on their knees and once at the top they enter the chapel and are presented with a medallion, a parchment certificate and a list of local orthopaedic surgeons.

The original medieval pilgrims not only climbed on their knees, but wore chains around their ankles! A rather wincing vision that is to this day recreated at the biennial meeting of the local chapter of the Rocamadour Masochists. 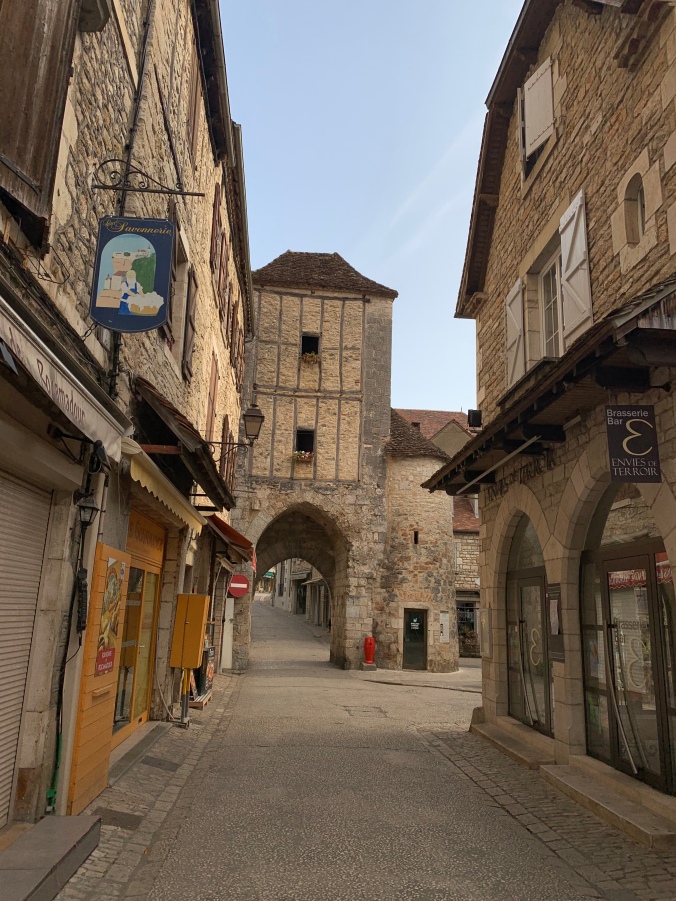 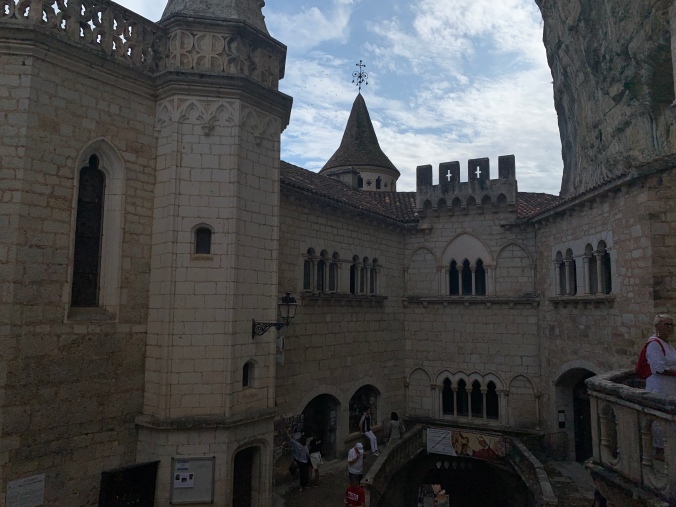 A few extra pics of the day

The stream that feeds a medieval mill 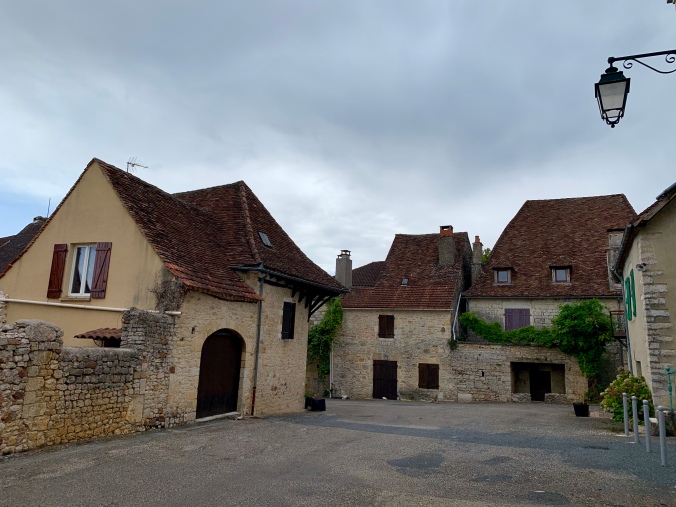