Sitting on the beach front at the village of Inch which bears a remarkable resemblance to Middleton Beach in South Australia other than one obvious difference – its overcast, in fact misty with slight rain, which being Ireland, will pass in 30 minutes or my name is not Graham Norton!

As it states in the Bible: “and so it came to pass”.

The route follows a “main road”. There are in fact not to many other options. Indeed to give the American tourists their due, “golly the roads are so narrow”! No shoulder either. I do miss a rear view mirror! The motorists are, to add to the mild anxiety, not quite so cyclist aware as the Europeans!

Now I am sitting in a rather forlorn vegetarian cafe (sort of similar to those you might find at Semaphore). Despite the fact that the owner is Georgina Campbell and the menu states “recommended by Taste of Ireland 2012”, it is definitely Indian in food and atmosphere. The young waitress explained that the CD background music was “The Best of Bollywood”. Initially given my presbyacusis, I thought she said “The Best of Belly Dancing” – a not unreasonable perception given the music!

The sky has cleared! By the way for the cyclists, Michael, the Irish tour guide who set me up on Day 1, massages baby oil on his legs, claims it adds protection against the rain. He gave me a bottle so shall experiment.

Heavens, 5 bikies have just stumped in. Not sure how Georgina copes with all that leather in her vegetarian restaurant? Still a dollar is a dollar!

I passed through the Village of Boolteens where a footpath shop sign boasted “computer PC and lawn mower repairs”. I was sorely tempted to pull over and investigate if only to look in the front window!

The Homes along my route today suggest this is a well to do region – beautiful, new looking with lots of greystone and slate roofs. All surrounded by the greenest of green lawns.

The cycle route is not too strenuous compared to the Camino. Undulating roads, the weather crisp and as they say in Queensland: “sunny one minute, overcast the next”. Ideal bike weather I work up a sweat but the wind rapidly evaporates it and supplies a chill factor.

Tomorrow a day at leisure in Killarney. 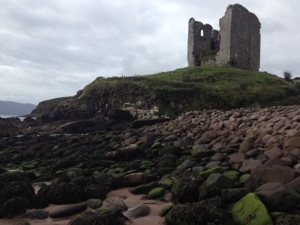