This was a delightful and unique day for cycling and sights! There are 3 major fresh water lakes. These are called Lochs in Irish, obviously same name as Scotland!

There are dedicated walking and cycling tracks, the park is so huge that roads ( of the motor car type) pass through it as well again rather narrow! I managed to source a rear view mirror and I am at peace with the world, not to
mention my Maker! Now I can anticipate being hit from behind.

Because the park is so big, with so many paths, tracks and roads, I decided I must do something to minimize the risk of my relentless disorientation (one can understand that lost in a National Park gives new meaning to the word “bewildered”!)

I lashed out and brought one of those ordnance survey maps that are extremely detailed, characterized by stating the scale (1:2500), contour lines, camping sites and the position of grazing sheep.

The other characteristics are that they open up to the size of your kitchen table, always opening out fully in the upside down state and inevitably the precise location of where you are at any one time or where you want to go, is invariably at a crease, fold or torn part of the map on the bottom left hand corner. This of course translates into the upper right hand corner when you have opened up the map fully. If you do this on a table, it is inevitable that you will accidentally knock your caffe latte over or worse still as you open it up in mid air you elbow a tourist at the table behind you.

The first interesting place was a medieval monastery – Muckross Abbey. The stone cloisters small in area, so stark and “cold” compared to those same structures in Spain, had a gigantic Yew tree that spread out to occupy almost the whole of the square. The abbey had an equally fascinating graveyard.

The abbey was the home to a particular order of monks called the Observational Franciscans as they demonstrated rigid observance of their monastic lifestyle. I am sure I would pass the entry exam, hands down!

I then rode along beautiful oak lined tracks to the geographical point where the 3 lakes join up – called – wait for it – The Meeting of the Waters. Another stone medieval arch bridge and weir nearby.

I then rode on a “main” road N71 up a gradual climb past several mountain lakes, treeless mountains, grazing sheep and the country green and lush. The destination was Moll’s Gap.

The ride of some 12 km to a height of about 200m had the feel of a mountain pass in Switzerland. In fact it reminded me of the climb out of Meiringen the first day when Bruce came pedalling up dripping with sweat and looking decidedly unwell on arrival. We were all seated or standing on the balcony of the chalet cafe waiting! Not realising that we were all in the cafe, he crested the mountain and was about to peddle furiously like a mad man down the steep incline after us! I had to literally scream at him to stop.

I believe that this pass (Moll’s Gap) is as 200m yet the treeless mountains, whitish stained granite rocks and lichen, all contribute to a sense that I am above the snowline in the Alps at 2000m at least!

The joy of riding back – 12 km mostly down will be shared with empathy by my cycling friends!

On the way back I passed Muckross House a mansion of 65 rooms (now that is a house in which I could easily get lost) built in the Tudor style.

Last night I had fish cakes! Beautiful! What shall I have tonight. I can’t visit Ireland and not take in Irish folk singing at a local
Pub! Bugger the start time is universally at 9.30 pm and those who know me well, know where I at that time of the day ( or night) ! 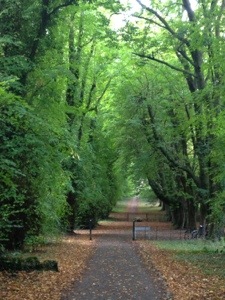