Having been terrified by the sights of the ‘Beast from the East’ weather pattern across Europe in the week before I left Adelaide, it has been a remarkable beginning to my holiday, at least as far as the clear, blue sunny days. Granted there is a biting breeze and a chill factor that brings back memories of Iceland in July last year, but so far every day has been perfect – a sort of reverse temperature variation of the weather slogan for Queensland!

Today I shall visit the Palm House Gardens before leaving at 15:30 for Warsaw and the Conference! Yes I do need to justify the expenses claim, I have no doubt that Stephen Marshall will be checking up me personally.

Incidentally, as a complete aside, being the trend setter that I am, more than 6 years ago I committed FaceBook suicide and started my own blog site – the very reason you are on this page! The reason had nothing to do with the fact that my daughter had 4983 ‘friends’ and I had 3 , 2 of whom had actually accidentally ‘liked’ the wrong Graham Norton anyway. Seriously I am, I feel vindicated by the current data breach mess, not that I have anything to hide: it is in the open domain that I am a ‘pillow biter’ and have never slept with a member of parliament- state or commonwealth.

A few pictures with occasional comments

Various pictures of the Poznan town square. In the centre is an ornate town hall and municipal offices which is now an historical museum. I have a sense of déjà-vue, but I cannot remember where I entered a town or city square like this in Europe. Any suggestions?

I explored the Cathedral Island a fortified island in the middle of the Worta River. There is a flourishing monastery and I saw several priests in black flowing cassocks, some quite youthful surprisingly. At least two carried IKEA bags which begs the question of what on earth would a seminarian need to self assemble in the cloisters, or perhaps the closet? I dawdled in the vicinity in the hope that I might chance upon a Nun or two carrying bags from the Polish equivalent of Bunnings, it was not to be.

This is a VERY clever visual perspective optical illusion…. look carefully at the picture below..

Well… have you worked it out? The Yellow red roofed building to the right of the square is real, BUT the facades of the buildings facing towards you, the green house, the tree and all the mish-mash of houses and appartments are PAINTED on the side wall of the pink faced building facing east, right up to the sky line of the pink building .. I also mean the tree behind the green house not the tree at the corner of the square, which is real.

Finally in the 20 km I walked on this day, I finished up exploring Citadel Park – a forest atoll with many graves and a rather derelict museum of war machinery – tanks, airplanes etc. It not really a War Memorial as such but nevertheless a large peaceful park in Poznan for meandering and meditation 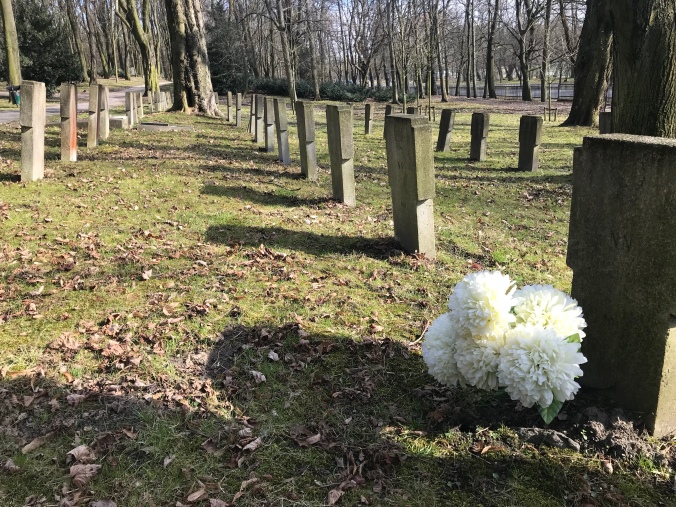