A long train trip from Gdansk to Poznan – mostly on flat rolling plains with agricultural villages interspersed with zones of industry and transport hubs. We rolled along at 120km/hour a sort of Japanese air-rifle train . I was not asked to pay added fees for this, although it was clean and safe. The trolley lady ignored me as she served the other ‘Premium passengers’. Eventually I went independently to the Dining Car and paid for a cup of woeful coffee and 2 rusks… (Autocorrection suggested ‘tusks’, which on second thoughts I should have accepted).

I am staying at the Blow Up Hall 5050 Hotel- part of a modern conference centre and shopping complex. I was reassured by my wonderfully efficient local travel agent that the name was NOT in anyway related to previous acts of Polish liberation uprisings in the 1950s, but was named in homage to the movie “BlowUp” staring David Hemings ( I thought it was Terence Stamp) and Vanessa Redgrave. It was made in 1966 and for every (nay most) Adolescent males, sitting up the back in darkness watching Vanessa Redgrave being photographed in the NUDE, was far better then being given enough money to buy a box of Fantales. It was understandable that this talented actress was known henceforth as ‘Vanessa the Undresser’ As to I , my preference was a box of Jaffas AND the unrequited desire to see David Hemings in his underpants. Although I still prefer Terence Stamp.

The Hotel is described on various web sites as Avantgarde- which is interior design speak for the shiny black, chrome and mirrored finish in my room. It is very disconcerting indeed disorientating. Words are not adequate to describe the visual catastrophe. The bathroom has a full length mirror along one wall, so that if you have any difficulty in perspective when showering or shaving, one can always do a stand alone gym workout by turning around and facing the mirror. I include pictures: 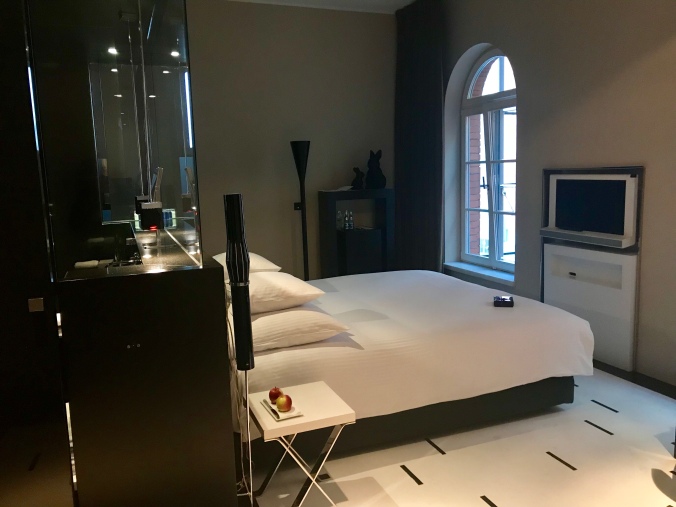 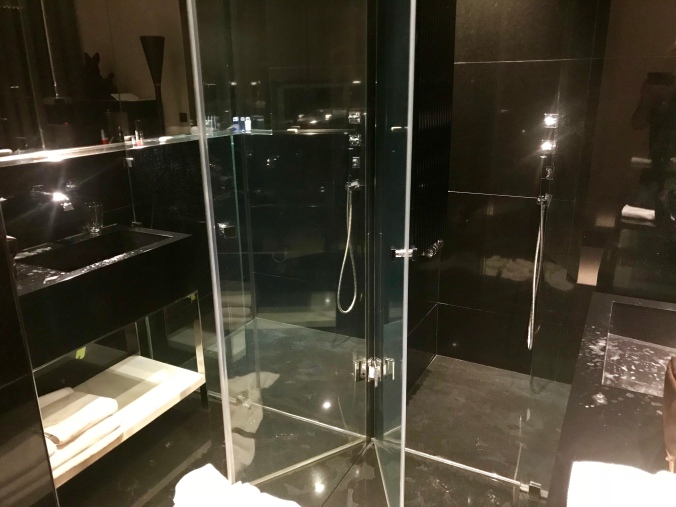 The toilet is separate from the bathroom. It is totally BLACK – close the door and one can experience for free, the sensory deprivation so effectively used by the invading American army in Iraq. It is impossible to know where one should sit or stand to answer the call of nature. Even at the best of times in my well lit bathroom in Adelaide, my sense of aim is problematic, but then as my friends know I can’t even throw an ball or catch it with any sense of manly skill or pride.

The room it self is quite big and very quiet. The TV appears to be kaput. There are no tea or coffee making facilities, although it has just dawned on me that I should undertake a more careful and minute search of the walls and shelves, as if the kettle is in shiny black plastic, I will not see it.