A round trip of 500 km from Paihia to the most northern land point of New Zealand on a superb sunny day. Wendy my charming host from Decks of Paihai, provided a healthy picnic lunch, which saved me from the crush of the “all you can eat smorgy” with 150 odd tourists from 4 coaches.

Barry was our archetypal bus driver and tour leader. He had a deep raspy infectious laugh, which was continuously on show as he spent more than a two thirds of the 10 hour journey cracking jokes, at which he himself laughed. He was a fascinating character. Some of you may remember on ABC Radio National, “A Prairie Home Companion”? It was syndicated from American public radio and the host was Garrison Keillor. It was the sort of radio programme that the family would gather around the “wireless” on a Saturday night to listen. It was best known for its musical guests, especially folk and traditional musicians, tongue-in-cheek radio drama, and Keillor’s storytelling segment, “News from Lake Wobegon”. Garrison had a fatherly homespun folksy philosophical style and Barry was New Zealand’s equivalent. Whilst his intentions were honourable, his comments were slightly sexist. Often he would admonish the blokes on board for “not telling that wonderful woman in your life, how much you love her”. When was the last chance that you hugged or kissed her? This was all commendable and understandable, but I suspect that in the bus there were several older men and women who may have been widowed or worse still, homosexual and single.

As we approached the tip of the Northland he told a rather touching and sad story of a woman who was on a tour with him a few weeks back, and was nursing long held pain, frustration and anger towards her mother. The reason? The mother a vivacious and strong woman in her early 80 had been diagnosed with a progressive degenerating neurological illness which would ultimately cause her demise. One suspects it may have been some form of dementia. Anyway the mother whilst still in charge of her faculties, died suddenly and the family suspected suicide. In other words a form of euthanasia. The daughter and indeed the rest of her siblings, were torn by so many emotions about this and had difficulty in comprehending why their mother would even consider it- so out of character. But the point of the story was that at the sacred Maori site we were to visit that day, the woman’s daughter after a good “talking too” by Barry, had an epiphany and forgave her mother and came to an understanding. Now the point if me telling this, is that Barry, who I assumed had Maori blood, told this story with such empathy and feeling that a not insignificant number of the group began to pass around a large box of Kleenex.

As we approached the Sacred Site, he asked permission to sing a Maori song a sort of traditional hymn I guess. He had a not unpleasant baritone voice. Now all things considered- the parable of the prodigal daughter, the terminally ill mother and the finale of the Maori hymn, presented with sermon like overtones, the atmosphere in the bus was by now bordering on the funereal.

Barry, genuine and simple soul, did not consider the real possibility that given the overall age of the group, at least several of whom were decidedly frail and may well have some insidious terminal illness, that were he to offer at the end of his song to pass around syringes of Pentothal, he may well have done a brisk business.

The buses, of which there were at least 5 that day, drove at breakneck speed along the 90 mile beach at times passing through the surf! Suffice it to say it was genuinely exciting even though it’s only 64 miles long not 90! For those of you from Adelaide, imagine driving along Middleton Beach for a distance of 60 miles! Then we stopped for sand tobogganing. It’s akin to surfing with a board but on a sand dune! Great fun. Then to the most northerly point of New Zealand and the original lighthouse, where the Tasman Sea and Pacific Ocean meet, the same longitude as Coffs Harbour in NSW. then we turned around and headed back home stopping along the way to visit a Kauri forest.

Barry had an almost unbelievable story about the forest. Queen Elizabeth II Visited NZ to attend the Commonwealth Games, the year was around 1990. The civic fathers decided to build an elevated walkway and platform for about 750m through the tops of this subtropical forest, for the sole purpose of the Queen to perambulate through the pines. The cost of this royal roundabout was a little more than a million dollars- a not inconsiderable sum in those days. Not surprisingly, it was not universally supported by the locals! Anyway, the Queen drove up with royal retinue, took 11 steps on to the platform, whereupon her secret service police whispered in her ear that she was NOT to descend any further as they could not guarantee her safety. She peered over the rails, waved a gloved hand to any Kiwi birds in the undergrowth, said “what a lovely forest”, turned 180 degrees, got back into the Rolls and drove off! But the platform and elevated walkway was great investment as it is a stop off point for the tourist buses. I wondered whether I should disclose to Barry that after 15 years, an Australian Queen passed by and walked the whole 750 metres?

So the tour was well worth it. There are the inevitable irritations with any bus tour all over the world. They are related to the fact that the driver has a captive audience and crowd. So any comfort or sustenance stop is always at a place that requires one to walk through the “souvenir shop” or the ancient woodworking factories of the Maori Kauri Kingdom. On this trip, just in case one did not have the time to purchase all that one needed to take home on the way there, the tour bus pulled in again on the way home! Barry in his evangelical style, worked the group up into a lather as we approached the Ancient Kingdom stop, suggesting that the ice creams here were the BEST in the whole of New Zealand. To deny ones self a ‘hokey-pokey’, would be a mortal sin.

As a final note, the Northlands of NZ are absolutely stunning and I could return, but it is not suitable for riding a bike. The roads are shoulder-less and very busy with logging trucks and tourist buses fighting for the tarmac. So one must sadly use a car.

Map of the bus trip 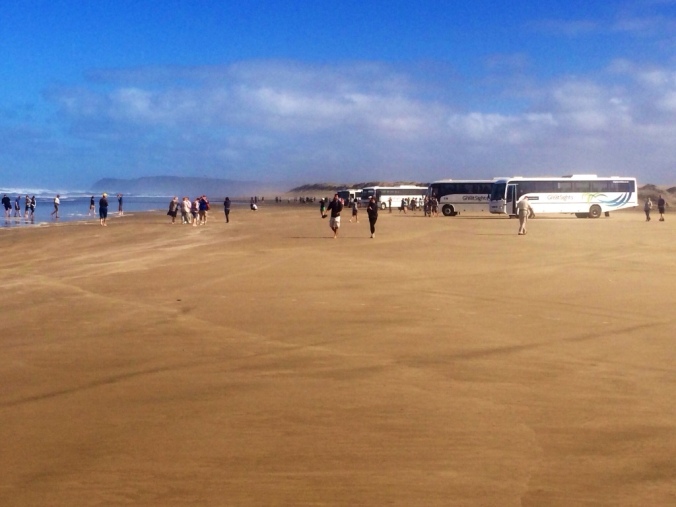 As you can see it was desolate but by no means deserted!

The northern tip of NZ 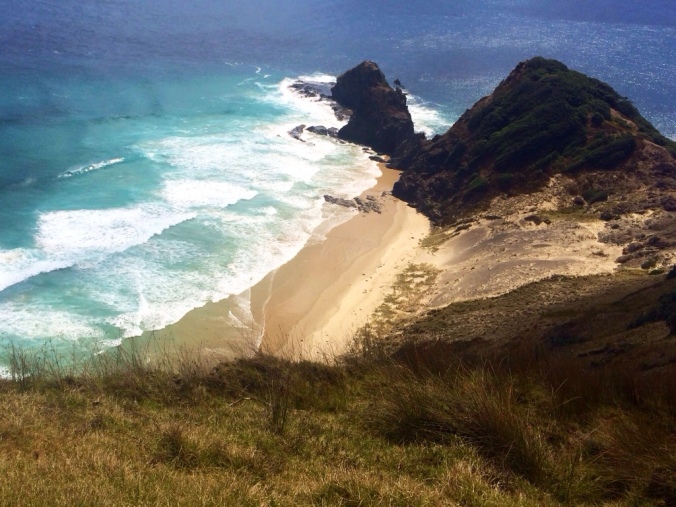 One thought on “A Day Trip to Cape Reinga”