The Frommer’s guide to Brazil is quite open, if not mildly scathing, in its opening chapter on Brasilia by stating ” as the attractions in Brasilia are architectural, one can dispense with this city in a day”.

Brasilia is a “designer city”.

A rather desolate, hot, red-soiled plateau in the centre of Brazil was chosen in 1956 as the site for the new capital. My initial reaction having walked a few hours is that this city is a cross between Canberra and Alice Springs. You can interpret that anyway you like!

There were two famous Brazilians invited to create this metropolis. The town planner Lucio Costa and the architect Oscar Niemeyer.

The first consultant made 2 momentous decisions, firstly, given that it was 1956, the motor car obviously ruled! Secondly that the city plan (layout) resembled a giant crossbow. Running due East-West through the centre is the “arrow” – the world’s widest thoroughfare! 6 lanes of one way traffic, a central nature strip more than 100m wide then 6 lanes of other way traffic! Imagine Port Road Adelaide multiplied by four! The “bow” is a slightly less wide street, intersecting north-south but in a gentle arc.

With wide, one way streets, Costa designed a system of turnpikes, tunnels and overpasses that brilliantly eliminated the need for traffic lights!

By 1960, within 4 short years, the first humans moved in and the city was declared “open”.

I suspect that it was at this time, that the penny dropped with respect to other means of transport other than the car or bus – specifically “feet”! (Not to mention pedal power). Footpaths seem to be an planning oversight if not after thought. Moreover the only way to get to the other side of a road some 750m wide in Brasilia is to be born there!

Those footpaths that do exist, abruptly stop at the turnpike or access road! So rare traffic lights have been added principally to reduce pedestrian mortality as there were a significant number of people on foot, who, initially dodging death by hit and run, reached the wide lawn covered central nature strip, only to die of starvation, when it proved impossible to complete the journey to the other side.

The architect, Oscar Niemeyer, is still alive at age 104 and practicing! He is world renowned for using cement in his creations. He has a passion for smoking cigars! What is it about cement and cigars that makes a human pass a century?

Rather than describe his “fluid, feminine” creations in cement, “google” his name or Brasilia and see for yourself.

There is thus, like Canberra, a definite symmetry to the city. There are three main distinct and separate districts : government, residential and hotels/commercial. These areas are laid out along the main east west thoroughfare and as well split into two – a north and south section! So for example there are hotels in both the north and south side of the city literally across the main road from each other! Identical high rise office blocks, housing government departments run down each side of the road , at least a dozen on each! ( I hope you are taking notes because there will be an exam on this later).

So logical and seemingly intuitive is the layout devised by this Costa chap, that you could be forgiven for assuming that one could never become lost in Brasilia! Well you are forgiven!

This layout gives new meaning to “deja-vue” or a “mirror image”! I surely am in the right place I think and yes I am – but 800m away on the opposite side if the road! Familiarity is rapidly breeding contempt for this Costa chap. I would not be surprised to discover that he was one of monozygotic twins.

At about 3 pm a sudden tropical downpour cleared as quickly as it appeared. A little bit like Ireland. Difference one has an ambient temperature of 32, the other 12.

A colleague at the conference has suggested a few things I may also visit. Like Canberra, Brasilia has a man made lake and a great botanical garden. 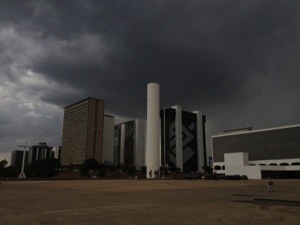 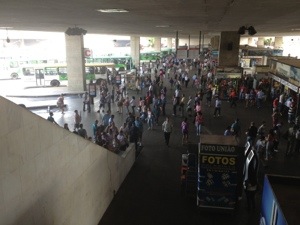