This is my penultimate day of cycling and there is bad news and good. The bad, not unexpectedly relates to the weather: cold, wet and windy! It’s been the least enjoyable day of the trip as the rain was persistent. I was rugged up but the rain in one’s face, spectacles fogged up, detracts from the overall experience. Misty mountains are still enticing, in moderation!

The good news is that desperate and damp (in truth, soaked) I arrived at my destination – Carrig House. This is 5 star accommodation on the shores of an inland lake, teeming I am told with brown Trout. It is described as a Manor House as indeed it is. “To the Manor Born”. Huge rooms, marble fireplaces, huge sofas with dozens of fluffy pillows, antique furniture, wallpapered walls, heavy brocade curtains – you get the gist. And the Jaguar motor vehicle in the driveway.

You are greeted by “Audrey” with tea, scones and fruit cake, classical music on the radio ( in this case definitely the “wireless”).

But back to how I got here.

My first stop today was the fishing village of Portmagee. The route was delightful along the back roads and I came across several sites of peat “harvesting” (if that is the correct term). The Irish call peat “turf”.

Two things of note happened in this “little piece of heaven” ( as the brochure claims) Firstly I was nipped on the ankle by a dog in the street. It drew blood. I could not remember my last tetanus booster, consequently as I cycled along my niggling anxiety about being lost was magnified by the risk of developing lock-jaw. Lost in an Irish bog dying of tetanus.

The second event was that I had tea at a tea house on Portmagee Harbour. Every cafe near water has the same decor and atmosphere. The walls are decorated with black and white, even sepia, photos of bye gone days, depicting sailing ships, horse and carts, the harbor, the quay, the pubs. Incidentally, why is it that photographs of women taken before 1901, capture on print what can only be described as apparent grumpy old men in drag?

As well, framed newspapers tell of momentous happenings. Portmagee is no exception. According to the local paper of July 12th 1979 its’ front page, had pictures of a smiling young lassie, one Eileen O’Leary being presented with a silver cup – the first qualified female pastry chef in Ireland.

Included in the picture was Master Chef Eugene McSweeney ( with an obvious degree of pride. Perhaps he took young Eileen in hand ? )

The journalist further documented “Chef Eugene McSweeney is of the opinion that women are naturally more attracted to the pastry department than to the sauce corner……”. The sauce corner?!!

On this penultimate day, I also came off my bike I had crossed to the island of Valentia. As it was wet, windy and generally depressing, I rode from a bridge access, several kilometres to the other end where one took a ferry back to the mainland. This is not Kangaroo Island – one could swim from island to mainland 200m between the two. At the ferry loading there was what I thought was a white line on the road delineating where cars lined up for the ferry. I was at the time, (uncharacteristically) distracted by something, rode across to line up for boarding and the white line turned out to be a raised white kerb! I struck it and bingo! Base over apex! The only thing ruined was my mascara which was running already from the rain!

The highlight of the day was yet another crest and breathtaking descent on a VERY narrow road, a shear drop on the left and screaming down at great speed to Rossbeigh Beach. Today as I write this, sitting in the Manor by the fire with a glass of French champagne, that descent, in retrospect, was stupendous! On the day, however, it may have lost a bit of its appeal due to “brain fog”!

The weather is a perennial topic of discussion even amongst the locals. An elderly Irish couple explained that the summer was wet. Something about the jetstream moving a few hundred kilometers “down”.

There was a week to ten days of sunshine in March (March !!! ) and since then constant daily rain. August had ten times the usual average rainfall.

Tomorrow is my last day on the Ring of Kerry. I am leaving in style! A half bottle of French Champagne a slap up meal and definitely NO food pics on the iPhone! even though they justify it! 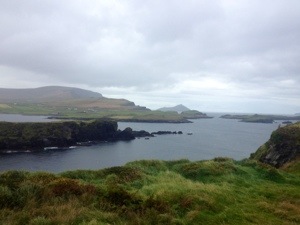 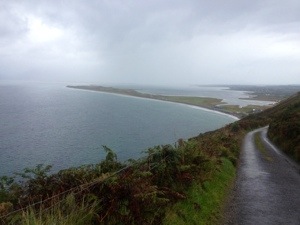 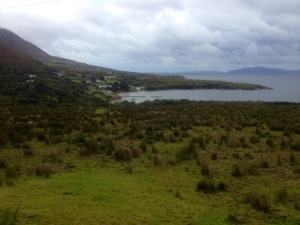 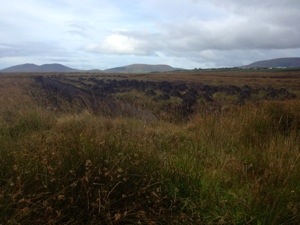