Today I decided to have a lay day. I was, weather permitting, going by boat to the “Michael Skellig”.
This is a barren stony rock rising out of the ocean, no human inhabitants, an abandoned monastery ( you guessed it- medieval) but teaming with wild life. The weather was not permitting! Too much swell! I was not surprised as the iPhone weather app suggested wind and rain. However the day was mostly sunny – as it turned out.

I now accept that I live each day as it unfolds when it comes to the weather. I can state categorically that each day has a stiff sea breeze ( even when nowhere near the sea), grey ominous cumulus clouds, broken sunshine and each day has the feel of a brisk Australian winter day! The contrast is all the more stark as I spent almost a month in Spain in temperatures serially exceeding 35 degrees centigrade!

All of these perceptions and remarks will give so much ammunition to my archetypal cynic in Australia (Mr Lacey) that he will be beside himself with glee!

So I decided to WALK a bit. There is a well delineated “Ring of Kerry Walk” some 270 km long. Indeed so well marked that even I would find it a challenge to become lost! The only drawback and it is a considerable one, is that one would need strong agricultural grade gumboots to safely cross every boggy field! I contemplated whether any Irish farmers have disappeared walking across these fields? One’s feet sink and stink (thanks to the cow manure)
with each step. Irish quicksand.

I discovered yet another delightful sealed, narrow access road around the cliffs. The road was, not surprisingly, called “The Cliff Road”.

During that walk from about 9.30 am to 2.30 pm , scudding grey rain clouds could be seen advancing across the sea towards me with a rainbow arching into the water. I was walking in bright sun, and then within seconds, I was drenched by a 10 minute downpour. The sun came out, the bitterly cold wind dried my trousers within half an hour. I had a rain jacket so my top half was dry!

I passed a unique circular stone “fort”. Actually it was an ancient farmer’s secure plot! This stone fortress was about 20m in diameter and had the remains of a square and circular building within. Fascinating.

As I walked the cliff road I watched as graceful soaring white sea birds circled in the updrafts of the cliffs and then plunged vertically like a dive bomber into the sea, to reappear several seconds later, presumably having speared a fish with their needle long beaks.

I was going to return to the same restaurant tonight to try the “House Platter for the Confused” but thought I should spread my tourist euro and went to one of the local
Pubs – The Fisherman’s Basket – and had the Trio of Seafood. My decision was vindicated, great food with some lobster meat, salmon,fish and a couple of crab claws! The crabs must have been on steroids!

Before I forget, my guesthouse in Waterville is clean and pleasant. Having had two amazing establishments to date, this one does tend to pale a little by comparison.

At breakfast a man, obviously a tourist, entered. I was about to try the friendly chat approach, asking him about his trip and from whence he came, when his mobile rang. His answering ring tone was ” I’ve been everywhere man”. He then spent about 20 minutes talking loudly to his mate. I remained silent and the more he talked the more I mentally calculated his roaming data costs with an inward sense of glee!

Tomorrow is my last stop with an extra day before Dublin on Thursday. 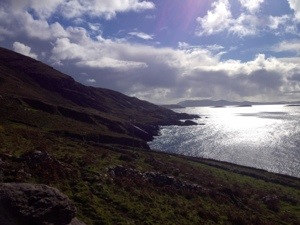 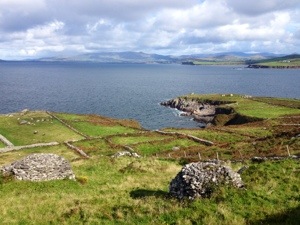 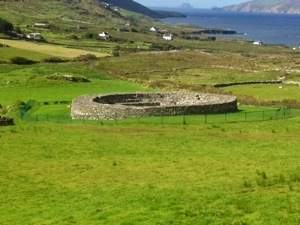