One of the most memorable nights at the Opera I have had! A grand performing space and a brilliant production.

It has been the ultimate in ensemble work although the one aspect that has shone for me has been the orchestra. I at times, will close my eyes at the theatre ( no you bastards it is not because it’s past my bedtime) and allow the music to engulf me without the action on stage intruding. I don’t want to use the word “distraction” because that is not the concept that I wish to convey.

Tonight I have had the sublime pleasure of hearing notes and instruments of which I have not been aware, at other performances – live or recordings! I wonder how much of this memorable night was the consequence of the acoustics of the Royal Opera House constructed on 1898!

The tempo seems “right”, each section of the orchestra in perfect unison and none overpowering the other. I say all of this without an iota of musical training, but after many years I can pick up a bum note!

The singing and action is up there too! A wonderful lyric tenor and a bel canto soprano, belting it out!

Silly me, I of course did not consider that the surtitles would be in a foreign language – Swedish!

It is one of the best operas as an introduction to the art. The cost of my ticket was no more expensive than a night at the opera in Australia. 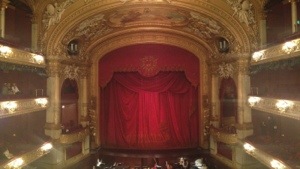