I am at the docks waiting to embark upon the Cinderalla II – I could not have asked for a better day. The sky is cloudless, slight chill to the breeze, bright sun. It would not be Sweden if there was not a underlying chill factor?

I am heading for the island of Sandhamn. You will have to Google map it! In fact suggest “Stockholm Archipelago” that should demonstrate the geography!

This modern diesel powered boat has an innovative design – the pointy end elevates like a drawbridge. The boat docks front on , the bow raises and people quickly jump off and on and within minutes the boat reverses out and is on its way!

Europeans are much more pet friendly when it comes to travel. Happy Labrador pup waited at the bow excited and jumped off immediately boat touched the wharf bounding around tail wagging waiting for master (or mistress). I think it belonged to the Master of the ship.

There is a film crew on the island shooting, I was told, a TV police drama “Murder on Sandhamn”! Reminds me of the TV crew shooting an episode of “The Big Loser” when Osley and I were on Kangaroo Island.

I am not sure how businesses can make any money with most closing for at least 4 or 5 months of the year as indeed was the case on this island today despite it being a delightfully Autumnal day. There is in an old lighthouse which offers year round boutique accommodation, “as long as ice conditions permit”!

Similarly almost all the “shacks” appeared to be locked down or even worse, uninhabited. I put a toe in the water – the Baltic Sea – and it was surprisingly bearable. The vast majority of shacks and even substantial houses are of weatherboard construction, finished in a mission brown oil paint, white trim and
Terra-cotta roof tiles. This may seem repetitive and boring, it is neither, as the colour combination blends into the natural surroundings and the attraction lies thus in the variation in design of the buildings – all the more transparent when the basic colour scheme is common to all.

The island is only a few kilometers long as it is wide so I walked the perimeter. Then had lunch – chicken pasta – at 85 Kroner – a steal really. It does one good to have a fling occasionally.

Boat home in a hazy sunny dusk, reading “David Copperfield” – wonderful prose: “…..as respectable a mystery as any pyramid in Egypt”!

A few American couples on the return, discussing the day’s outing to the various islands of the archipelago:

“Where did you go?”
“Grisham”
“what was it like?”
“do you really want to know!” – moans the husband of one couple. “dreadful” he states, giving the thumbs down sign at the same time…. “it was just a nature reserve”! ….

I was stunned. There is not one brochure that does not clearly state that the islands of the Stockholm archipelago are “pristine natural wonderlands with delightful forests, beaches and quaint fishing villages”!

For goodness sake were they expecting a Macy’s or a Sear’s Robuck?

Tomorrow is forecast to be rain,windy and cold so I shall make it a museum day AND I have discovered that the Stockholm Opera season is in full swing and have booked a ticket to “The Barber of Seville” tomorrow’

Saturday I will train to the old University city of Uppsala.

Sunday I fly to Dublin to start the cycle holiday! I plan to admit to the locals that I am catholic one day and Protestant the next – that should be safe? Proving that at least as far as religion goes, I swing both ways! 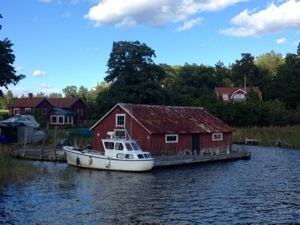 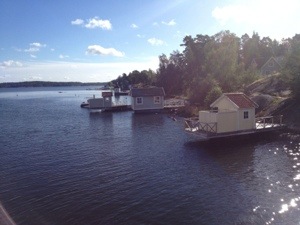 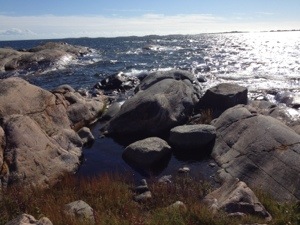 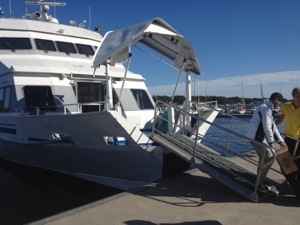