Lets break this into two parts. The cycle first then the delightful village of Grein.

The weather remained dismally depressing – overcast, constant drizzle and a cold breeze. The ride was only about 50 km today! Embarrassing after yesterday’s effort. I don’t so much mind the cold, overcast sky but the rain dampens things dramatically. One is rugged up and thus sight seeing or taking a picture is a major undertaking. Disrobing, taking off gloves, cleaning fogged glasses and then doing the same tasks in reverse, is irksome and thus avoided. Should the sun appear, one’s cadence decreases allowing one to see, hear and smell the sights and sounds.

Again today I met several familiar fellow travelllers from yesterday as well as some new faces. A group of 4 well to do Israelis on a supported self guided tour (luggage between hotels – panniers for schmulks) and then 4 down to earth New Zealanders. The latter I stayed with for some kilometres until a lunch break. They had started seven days ago from the origin of the Danube and frustratingly had seven days of rain.

They were rather stoic and somewhat resigned to this aspect – like water off a sheep’s back. “Lets have a cuppa”, exclaimed one of the women whereupon she produced from a pannier, a small outdoor gas stove and proceeded to boil the kettle! Within minutes all 4 were sipping hot tea and dunking biscuits! I was suitably impressed and said so! She explained that this particular stove was the ONLY one worth having as it was made from titanium! My tongue in cheek comment that it must have been suitable to take on the space shuttle, failed! She responded like a worn out teacher to a student in an “opportunity” class: “actually I doubt it”! A hint of resigned frustration.

To make the journey more irksome, they were packed for a camping holiday! All 4 had panniers containing 2 man tents, the previously mentioned stove, sleeping bags and blow up mattresses! I was yet again genuinely impressed. “Don’t you occasionally miss a warm bed and hot shower”? Of course was the uniform cry! We try to rent an on site cabin or stay at a hostel , every third or fourth day. I fiddled with the Garmin computer and commented on how bedraggled the sheep looked in the paddocks, In an attempt to rapidly change the topic, sensing they were about to ask me about my choice in accommodation. Memories of the sauna at The Landhaus zu Appesbach, came flooding back, not to mention the stuffed boar main course! They kept dunking! 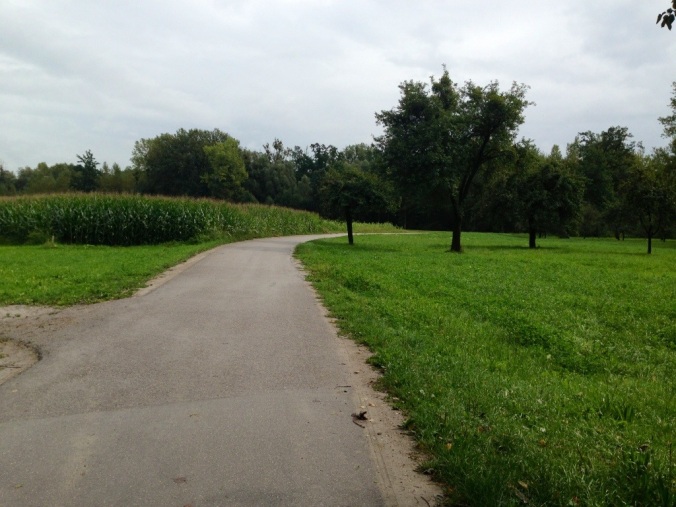 A couple of shots proving that the cycle path was as wet and dismal along the Danube as yesterday!

The ultimate titanium camp stove as produced out of a NZ pannier.