The accuracy of the weather bureau in Austria is equal to that of Australia. Today dawned cool and sunny! I had pre booked my bus and train. Bugger, I could have had a delightful cycle trip. Anyway Hallstatt is a tourist hub by virtue of its age and awesome location.

The Austrian tourism authority claims (and we are dealing here with an “authority”) that Hallstatt is the oldest village in Austria and the most photographed! So why would I bother to try and repeat history? Cause I have an iPhone 5, that’s why!

It was established when highly pure salt was discovered deep below the mountains, the sediment of subterranean salt lakes. The tourist brochure also describes a “prehistoric” ( the first millenium BC ) mummified salt miner, discovered in pristine condition and preserved. Conceptually, next time you use gourmet pickled lemons, examine the lemon skin.

The train trip and the ferry across the lake to the village is the highlight. Once again quaint alpine houses are built in a small bay and migrate up the mountain side. The water on the lake is a pale sulphurous green gray and clear as a bell.

There are two churches – a Protestant and Catholic. There is a Charnel House – explanation- the Latin for flesh is “caro”, the Latin to eat is “vorare”. Hence a carnivore is a meat eater. A Charnal House is used to store bones! Such bones have been buried and then after an appropriate time, years, exhumed. The flesh has gone, the body decomposed. Hence “Charnal”. This custom was used extensively when burial ground was limited and boy was it limited in Hallstatt. So one was buried, then after 15 years, the skull and long bones removed and placed in the Charnal House. A new body could be buried in the same grave site.

I hasten to explain, after this brief foray into etymology, that the term “carnal knowledge” does NOT describe your local butcher, it’s more likely to be the milkman.
.
Strangely the most attractive picture book scene as far as I was concerned, was a fairy tale looking white castle on the lake’s edge opposite to Hallstatt! The woman in the ferry ticket office said it was a “small private castle”. I asked if it was for sale? I shall discuss with my financial planner. It would be an awesome base for group cycle trips in the Salzkammergut region.

Once at the village things take a turn for the worse! The little esplanade around the village, nestled into the mountains is a tourist strip. You can imagine I am sure!

So after all that, what would I suggest to the Austrian Tourist Bureau? Come to Hallstatt, definitely! But only if in perfect weather. Of course a winter dusting of powdery snow on a crisp sunny day is more than acceptable. In any event, one should cycle in and ferry/train out. There should be no other option. 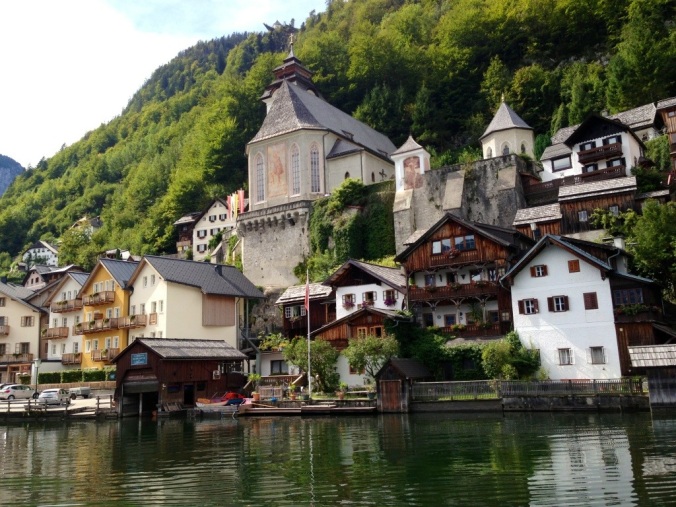 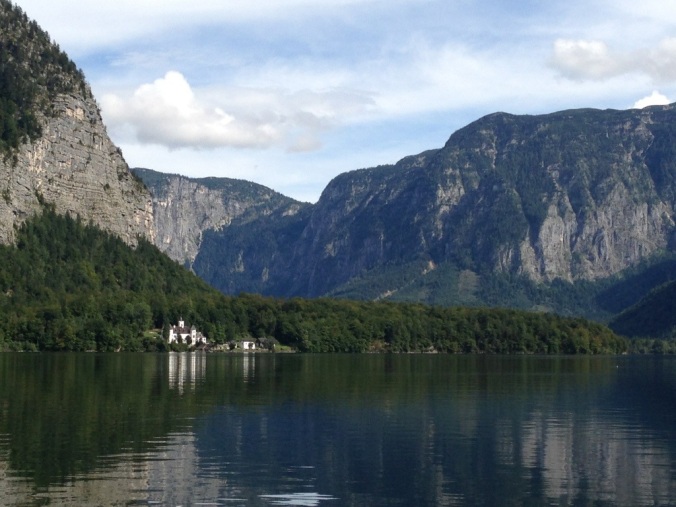 The delightful fairy tale looking castle across from Hallstatt. 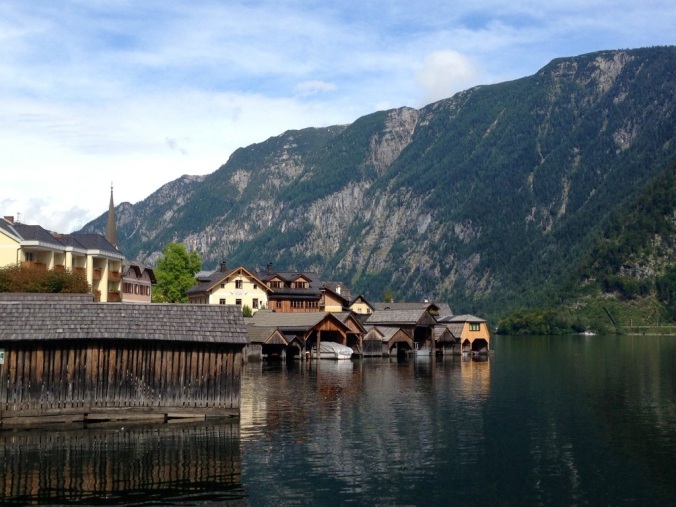