It’s all about the bike….
I can summarize my dislike of mountain bikes in one word: “mountain”.

Having completed the Camino on a BMX, the terms ‘Cycle-cross’ and ‘Trail Bike’, have totally new meanings. As some of you deduced, having unpacked the beast at Pamplona, the starting point, I managed to set it up with the front wheel facing BACKWARDS!

Consequently I rode the first week oblivious to the giggling and pointing young Spaniards until some kind soul, stopped me as I sweated and panted, pushing the beast on foot, up a cobbled incline in a small village and he made it abundently clear that my front wheel was in reverse!

No bloody wonder I found it impossible to ride up the mountains!

Responses from readers making predictable, gratuitous comments about arse around front wheels and my sexuality will be ignored.

Reminds me of a variation of the nursery rhyme that my mother used to quote to me: “Mary had a little bike, its’ wheels were white as snow, and everywhere the front wheel went the back wheel had to go”.

At times the bike behaved like Mulga Bill’s Bicycle, for it bucked and weaved and at times appeared to have a mind of its own. It invariably headed for the most obvious huge and sharp rock on the track even though I had the handle bars hard left, the bike went hard right! It would buck, pig-root and slide backwards then clear a stump and shave a tree! Once I almost did end up in Dead Man’s Creek!

So like Mulga Bill I have left the BMX at the bottom of the Santiago Creek and await the next cycle adventure in Ireland. I have another 3 weeks though to try cycling in Barcelona then Berlin and Stockholm. I must continue my pilgrimage across the continent.

All the hotels on the trail were delightful and appropriate to the tenor of the trip. 2 star or an occasional 3 star hotels that were clean and simple with basic bed and soft fluffy pillow and of course a hot shower. It would seem embarrassing if not entirely inappropriate, to turn up at the equivalent of the SAVOY hotel given that the whole sense of the journey was one of modest deprivation (without a modicum of depravity).

Breakfast varied – from the predictable hotel basic smorgasbord to sitting down at a rough wooden table and a “set menu” of OJ, a toasted bun and milk coffee. Like it or lump it!

Shower recesses were also interesting and varied. Many were a sort of Perspex cylindrical quarter circle reminiscent of the time machine out of a Dr Who TV series. There were major design flaws as the radius of the circle of the average shower in many hotels was so small that if one dropped the soap one could not bend over. Any attempt to do so would have led to, at worst serious internal injuries, third degree burns to the bum or at best a possible pleasant douche.

Have finished my book on the remarkable life of Mary Benson! My cousin has confirmed that there is a genuine genetic relationship. I wondered before if I exhibited autosomal dominant features, but on objective reflection I can only be X linked recessive.

I have been listening to a wonderful audiobook as I fall asleep on my iTouch : “The Mysterious Life of Charles Dickens” written by Peter Ackroyd specially for that fine English actor Simon Callow. It has stimulated me to return to those Dicken’s books that I read as an adolescent. With “Mary Benson” finished , it’s David Copperfield on my Kindle.

Weighed my self at the delightful new guest house in Barcelona: 68 kg ! Marcelo is the delicious owner . That is a story that awaits tomorrow! 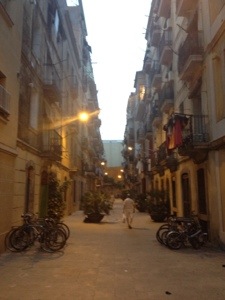