My cup runneth over, washing sorted early. Thanks to Google translate.

Loosely means, ” could you finish my laundry by this evening ? I am a Pilgrim. Thank you . ”

The friendly short statured woman behind the counter, not only guaranteed to complete it as requested but deliver it to my hotel.

As I was a pilgrim, she asked, a big favour: “would I consider giving her one of my pair of cycling knics as a memento? I tried to clarify if she would prefer them prewashed?

Humbled by this I explained that I only had 2 pairs to last 3 months and would a 1 cm square of the chamois, cut from a non vital part, suffice? She was ecstatic, fell to her knees and partially genuflected – no kisses – I did not have a ring.

As this undertaking had inspired such a totally expected response, I began to seriously consider the possibility of offering small squares of chamois along the trail. The more pieces of chamois I offered, so I would improve my chances of reaching heaven. Kind of llke a mounted Mormon?

However I quickly quashed this idea for several reasons : firstly by the end of the trail I would have a red, raw sore bum secondly it would dilute the intent if I gave out too many. One only needs to recall that in terms of catholic relics, as we know, that if ALL the pieces of Jesus’ foreskin held by individual catholic institutions were sewn together, they would cover a football pitch!

The final sign that chamois offerings may be displeasing the almighty is that a pigeon has just poo-ed on my iPhone! Now if it had been a dove, that sign may have been a bit confusing and interpreted differently.

I am sitting in glorious sunshine in the plaza outside the Leon cathedral, sipping cafe con leche and totally relaxed. ( “con” = with and you will recall that “sin” = without )

The ancient parts of Leon are awe inspiring ! I am glad the tour company suggest a rest day here. Lunch is another serve of ensalada. 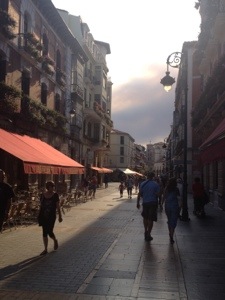 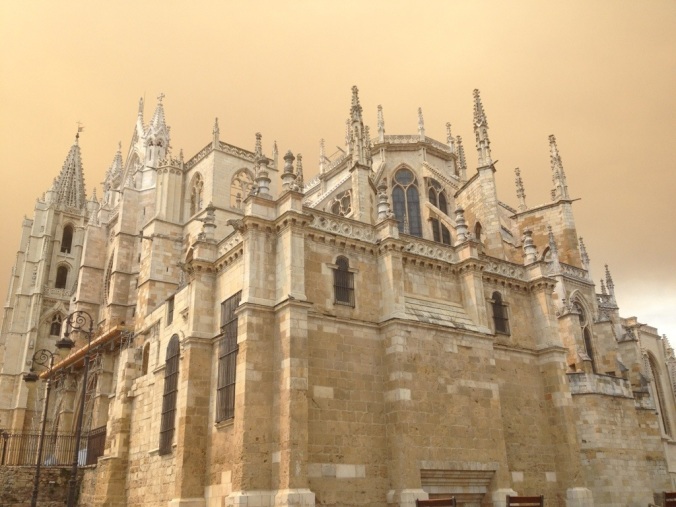 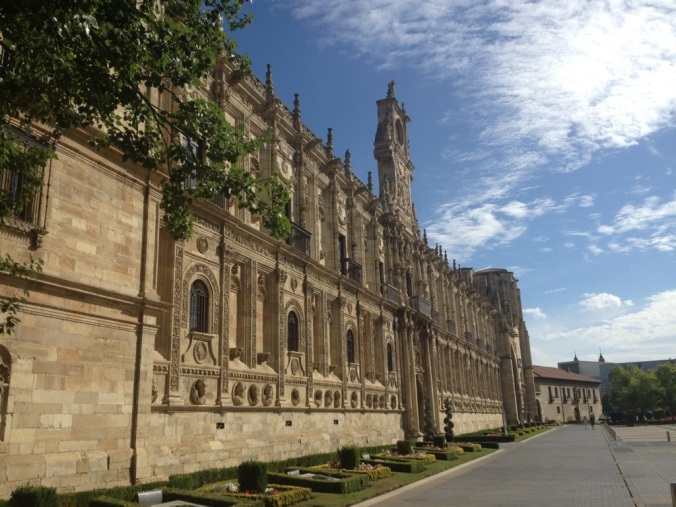