A brilliant start to the holiday – having fallen into bed around 7pm ( 4am Sunday Adelaide time) I woke around 6:30am, to clear blue skies and once outside, a bracing, biting breeze. I wandered around the waterfront of the “old town”- fascinated by seagulls that appeared to be ”walking on water”or at least standing on water in the sunlight of a new day. With that introduction, the more astute of you will realise that the birds were walking on ice!

So I explored the waterfront till about 7:30 then returned to the Q Hotel for a worthwhile breakfast, before warming my hands to venture back and explore the “old town “.

The lone seagull is standing on ice. Look carefully 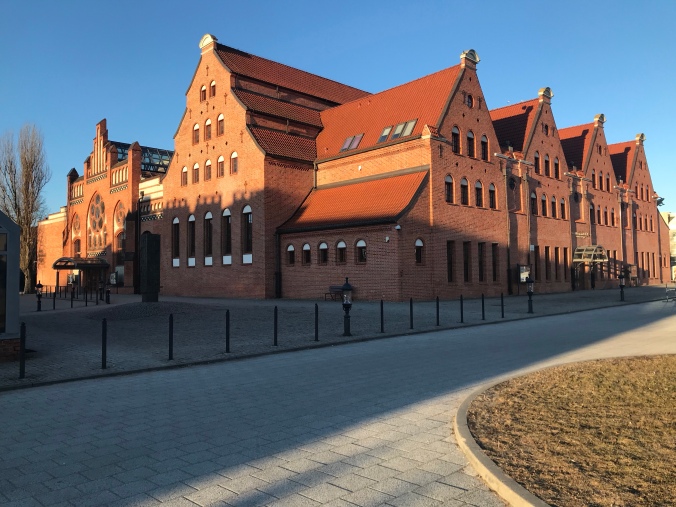 The home of the Gdansk Philharmonia concert hall 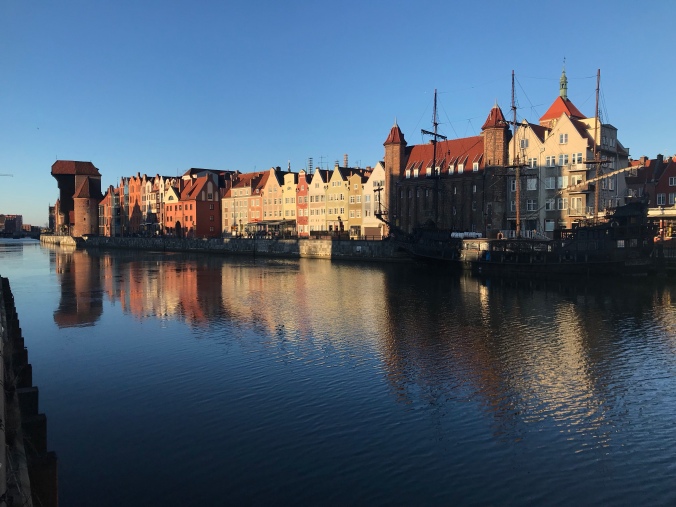 A few pictures of the old town…. 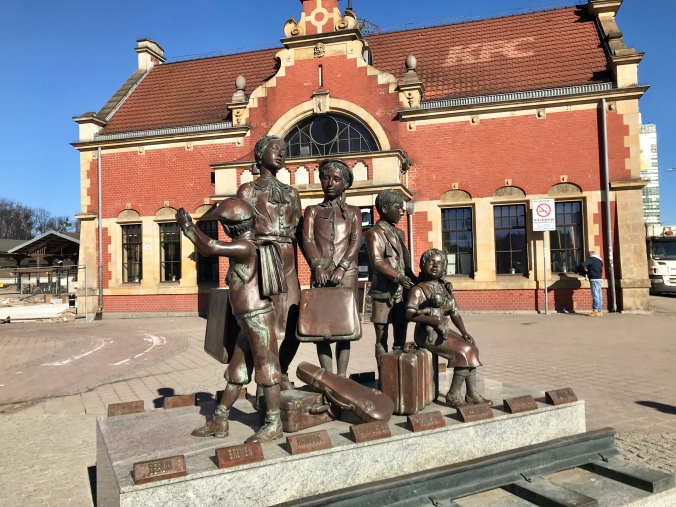 The Polish people also sent children, mainly Jewish, away to foster homes in Britain just before the invasion and this is a tribute outside the main Gdansk railway station. The more observant will note the faded ex KFC logo on the original old railway administration offices.it is still. KFC outlet – I positioned the camera to block out the yellow M! 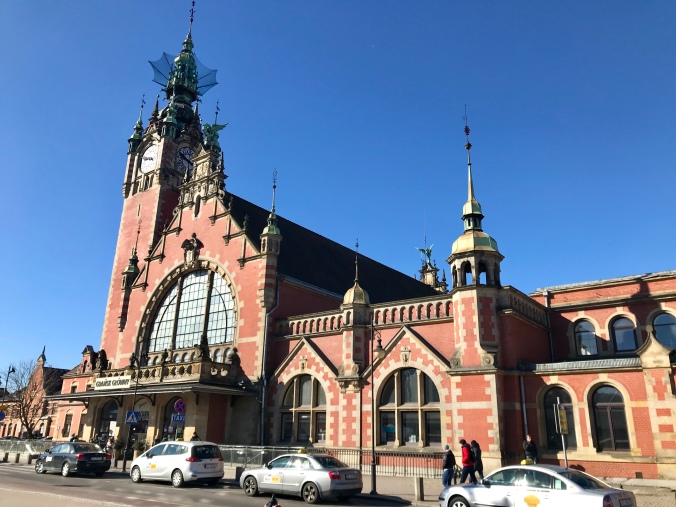 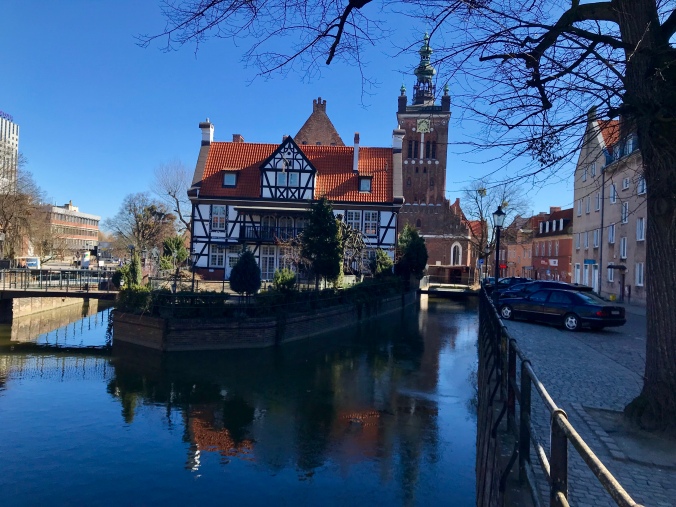 In the afternoon I spent the part of 6 hours in the Museum of the Second World War. It was opened in 2015 and is one of the most compelling, confronting exhibitions, housed in an architecturally stunning building all coming together in a technological multimedia experience. There are 20 rooms that start with the seeds of war – the direct consequences ultimately of the loss of WW1, by the Germans. Thence the rooms follow a logical sequence based on the time line as well as the many theatres of the conflict. The use of modern interactive technology is awesome. To give one example, the audio devices automatically sense when you pass the entrance to each of the 20 rooms, activate the introduction, lead to the various displays then end by saying something like

“feel free to take your time and wander around the exhibits and when you have finished leave by the door on the left above which is a huge picture of Hitler and I will be waiting for you in the main corridor.”

Then the audio guide detects that you have entered the main hallway and asks you to turn left or right as the case may be into Room X. In fact so intuitive is the system it detected I had entered the women’s toilet and gently questioned whether I had made a mistake. As to whether it’s query related to the fact that either the female toilet was not part of the exhibits, or rather cleverly that I was in fact, male, is a moot point.

Put Gdansk and this museum on your bucket list.

It is 4am and I am disturbed from a restful sleep by noisy laughing people in room 103. They are not speaking a recognised European language and to minimise the risk of accusation of racial prejudice, I say for a fact that room service has just delivered breakfast of steaming hot fried rice and soup. I think it only fair now that I am wide awake , I should do some Recorder practice.

Today I head by train to Poznan.

The Frederick Chopin international airport of Warsaw was blanketed in fresh snow, the sky clear and sunny, the outside temperature -10 degrees. The Boeing B77… (remember drop the last numeral) kissed the piano keys ! Indeed I have yet to have anything but a smooth gentle touchdown in all my international flights! The airport was cavernously quiet on a Saturday at 11am. Being one of the first off the plane I reached immigration to face the obligatory 2 lanes: EU passports to the right everyone else left lane … in a few years time it will give me a wonderful sense of schadenfreude to think that British travellers will be forced to veer left.

Anyway I trotted along literally hundreds of metres of the mazed, roped off lane, a lone non EU citizen, to discover on arriving at the immigration hall, both lanes converged and in the end I was pissing in the wind, merging into a seething mass of Europeans!

Emirates managed to successfully book my luggage straight through to Warsaw, unlike Qatar last year who managed to lose my luggage once it left Adelaide and who achieved the unenviable feat of doing the same thing for Vivienne on a later flight!

I was met at the arrival hall by a willowy blond baby faced polish lad who escorted me to a shiny black BMW.. it was huge and all I remember when I enquired, was that it was a “7.. XX “ in other words, as with Boeing aircraft, it was a BMW 7… something! I explained that in underdeveloped Australia we were still at “BMW 3 …” something.

So efficient was the whole process that my blond Pole had me disembarking outside the Warsaw Central station by 12:15, an hour to the minute from touchdown, the train to Gdańsk leaving at 14:20.

I had a prepaid Eurorail pass , indeed costing some 400 euro for the month and several sectors, at least I assumed so. Presenting my voucher at the ticket window proved to be an exercise in futility. The man gave the distinct impression that in 48 years of exemplary service to the Polish Railway, the ticket I had presented was an an utterly new experience. It could have been a pawn shop ticket , a laundry list or a counterfeit Russian 1000 rouble note. -I think he favoured the latter having held it up to the light and turned it over several times. He disdainfully pushed it back through the window and indicated The service desk, uttering the word “English”. Eventually I was able to deduce that the counterfeit 1000 rouble note, was in fact just the seat reservation, not the actual ticket and furthermore because I was booked onto the Polish equivalent of a Japanese bullet train, there was a surcharge of 43 polish Monopoly money which I had to pay immediately lest I be downgraded to the local mail train. It has been all sorted, I have paid the excess and now sit in the Polish bullet train, 2 hours from Gdańsk and 28 hours from Adelaide. 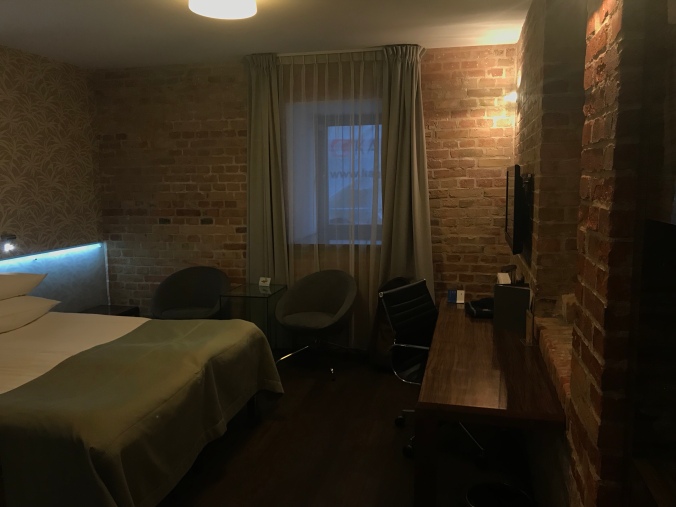