I had forgotten that overseas travel between destinations – as happened today flying from Santigo de Compostela to Barcelona – by definition involves the WHOLE day! One grins and bears it! Sometimes it seems that alighting from the plane, awaiting luggage and clearing the airport takes as long as the actual flight!

I am staying at Casa de Marcelo in the old city of Barcelona. I was met at the bus stop by Oliver , a friend of Marcelo. At this point I had a sense of deja vue which only Kenneth will understand as I immediately recalled the delightful “accidental ” bed and breakfast that we stumbled across in
Bendigo all those years ago! It was run by, as it turned out, two gay guys and we had a wonderful evening dinner together. I remember there was a pet squawking cockatoo that constantly walked/waddled after a rather old kelpie sheep dog, with whom it was obviously besotted! The older guy was a former airline trolley dolly (Dutch – given name “Art”- see I am not senile! ) and his young partner a “muscle mary” with his own gymnasium purpose built shed with full length mirrors around all 4 walls!

The other reason I remember the establishment is that it was called Ravenswood – the name of the castle in Lucia da Lammermoor! ( the Opera by Donizetti!)

I am sitting in a busy side street near the sea tonight and have had a serve of Spanish sausages, chips and vino blancho. Having lost about 8 kg I can afford to lapse for dinner. It’s now 10 pm and people are still turning up in droves to sit down for dinner. Marcelo tells me breakfast from 9am!!! I shall take a walk and swim before then surely!

Slept in! I am becoming Spanish! It’s quite humid in Barcelona. I am 10 mins walk to the sea. Marcelo explained that there are bad Mosquitos! This bed and breakfast is in an old 3 storey apartment block – perhaps more than a hundred years old. An ancient lift with cage like doors runs up the middle of the stairwell – one imagines a body discovered in the lift early next morning. As luck would have it Monsieur Hercules Poirot is staying in the apartment above.

Barcelona – the seashore is hot, windy without natural shade and at 10am appearing rather sad and tired like St Kilda or Glenelg but worse.

City Smell: musty, humid – slight mix of sewerage and in the narrow back streets, stale urine. Then a small baker shop with that unique smell of fresh baked bread combined with a musty, smell of flour on a dusty floor. I pass another shop that smells of spices

Now I know that the iPad has a camera and some of my best friends travel with their iPad, but there is something vaguely queer, in a sort of disproportionate way seeing tourists point an abject about the same size as an A4 sheet of paper and take a picture. The same applies to holding the device up to your ear! This is an incontrovertible argument as to why the iPhone will maintain the exact same dimensions over the next 100 years! Taking pictures or listening and talking to a “brick” went out of fashion a decade ago!

The most interesting visit so far has
been the Museu Frederic Mares. As the brochure states: ” tens of thousands of familiar and unusual objects that document Spanish lifestyle from the 18 to 19 th century. Beautiful delicate fans, jewellery, smoking pipes, toys, time pieces, smelling salts bottles, lace..the list goes on !

Had a swim on the Mediterranean tonight. Water almost too warm! 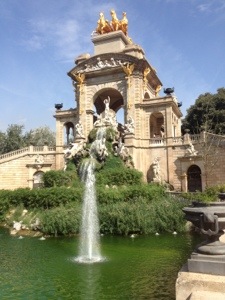 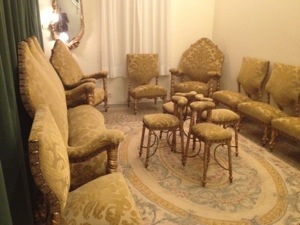